Visitors to the headquarters and winery of the Josef Hofstätter estate find themselves in the main square of a bustling large village with the municipal hall, bars and the village Church.

The winery and offices are accommodated in a grand 16th century edifice, originally built for the Austrian Imperial post coaches and it also housed the ‘Schwarzer Adler’ inn belonging to Martin Foradori’s great aunt. Josef Hofstätter made his first wines in the inn’s cellars. His nephew Konrad Oberhofer and wife Luise took over the estate in 1942 and it was he who recognised the potential inherent in vineyards.

He was the very first in South Tyrol to keep separate the grapes harvested in individual sites and name the resulting wines after the respective vineyards. Konrad Oberhofer’s daughter Sieglinde married Paolo Foradori in 1959. Paolo comes from an old-established family of winegrowers in the Adige Valley and owned vineyards in superb locations on the eastern side of the valley opposite Tramin.

Since then these vineyards have been administered together with those on the Tramin side of the valley in the family company’s headquarters which still bears the name of the estate’s founder, Josef Hofstätter.

“The excellence of each individual site is crucial in deciding whether to produce a single vineyard wine from the grapes grown there – a wine which best embodies the nature of the site”. Our wine range contains wines named after their sites and grape varieties. Traditional site names are limited to their original parcels of vineyard.

Extending vineyard areas to form large generic appellations - as has often occurred - conflicts with the philosophy of the unmistakable single vineyard wine. While many other wine producers have largely given up using established geographical site and estate names, we continue to consolidate this practice. Irrespective of transient market trends we intend to continue preserving with conviction that which has been tried and tested in the vineyards over decades.

Our vineyards are sited on slopes on both sides of the River Adige, embracing a wide range of soils and microclimates. Grapes originate from several family-owned wine estates with their traditional farmsteads and manor houses, stately country houses known locally as ‘Ansitze’. No other family winery owns estates with vineyards on both the eastern and western side of the broad river valley. Wines grown there bear the estate name on their labels: Kolbenhof, Barthenau, Oberer and Unterer Yngram-Hof, Steinraffler and Oberkerschbaumer. Other vineyards include parcels of land in the areas of Tramin, Neumarkt and Pfatten near Auer, all of which are blessed with excellent climatic conditions. In total we cultivate 50 hectares of vineyard in carefully selected sites at elevations between 820 and 2,460 feet (250 and 750 metres). 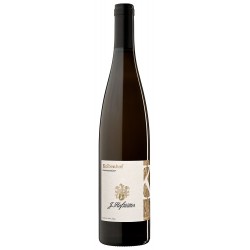 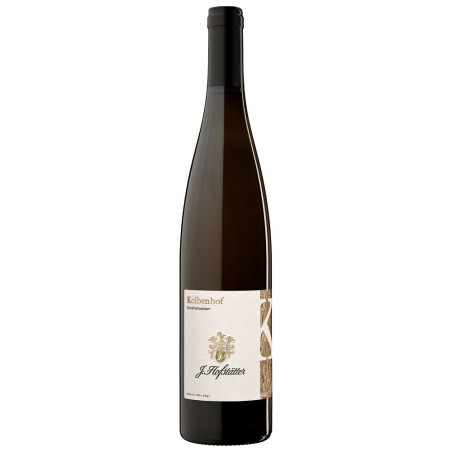 This is a highly individual wine and a copybook Gewürztraminer. This white "cru" Kolbenhof wine, produced in the heart of Alto Adige by one of the best companies in the area, is characterised by a classic note of spices, meadow flowers and roses, all of which are typical of the Traminer Aromatico species of grapevine...