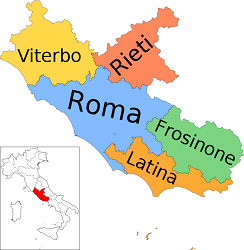 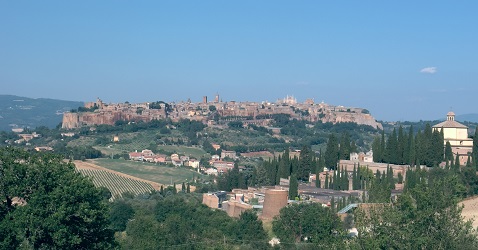 History and Tradition Humans have inhabited the riverside and hilly zones of Latium since the Early Paleolithic times. In the 19th century B.C. the Etruscans, who shared the area with the Latins and several other Italic tribes, founded the first settlements and city centers, also cultivating the land and introducing new agricultural plants. Little by little, the influence of Rome, the most important center of the region, grew until in the 3rd century B.C. it subdued all of Latium. With the growth of the Roman power, the peopled area around Latium also grew. The Romans improved the farming systems and built such impressive civil structures such as aqueducts, many which still partially stand today. They also built new roads such as Salaria, Appia, Aurelia, Flaminia, Cassia, Nomentana, Tiburtina-Valeria, Prenestina, Casilina, etc. that opened their way to the far-reaching colonization and expansion of the Empire which reached from today’s British Islands in the north, to the African coast of the Mediterranean in the south and all the way to the Middle East. The fertile coastal plain of Latium became a malaria-infested and impoverished marsh during the late Roman Empire through the anarchic barbaric invasions, to the early rule of the papal state. After the fall of Rome, Latium was invaded in turn by the Visigoths, the Vandals and the Lombards. From the 8th century, the duchy of Rome, including most of modern Latium, belonged to the popes. Their authority was not always recognized in the towns, which were ruled at times as free communes or by local feudal lords. Except for the area south of Terracina, which belonged to the kingdom of Naples, Latium remained a part of the Papal States until 1870. During the Renaissance, Rome was a seat of a splendid pontific court, commissioning art and architecture from the greatest artists of the time, changing the face and map of Rome in the process. Another period of great transformation in the region was started in 1871 when Rome became the capital city of the just-then united Italy under the rule of the house of Savoy. The growth of the Rome and Latium as a political, commercial and tourist center brought new economic affluence to the area which kick-started new civil developments. The Pontine marshes were reclaimed and transformed into an exceptionally rich agricultural territory. New industrial plants were installed in the provinces of Latina and Frosinone, and grandiose Eur business center and a Metro system were built in Rome. These developments and other cash infusions into the area were somewhat limited by the intervention of the Italian government as Italy spends, on average, less for the upkeep and maintenance its capital city than any other European country. The Wines Grape growing and wine making were well known to the Romans who produced excellent wines since Imperial times. The whites are the predominant variety — out of 25 DOC wines produced in the region, 20 are white. Mostly Malvasia and Trebbiano grapes and, in lesser quantity, Sauvignon Blanc Chardonnay and Voigner among the white and Cabernet Sauvignon and Franc, Merlot, Cesanese, Syrah, Petit Verdot, Sangiovese and Montepulciano, ripen along the volcanic slopes of the Colli Albani and other areas with soil rich in phosphorous and potassium salts. Notwithstanding the sexy pleasure derived by sitting at a Roman trattoria on some narrow Trastevere lane or one of the many evocative Roman squares twirling spaghetti alla puttanesca or toying with ossobuco alla romana, washing it down with white Castelli Romani (Roman Castles) wine typically served in caraffa (carafe), we must say that there’s more to the scenery than the wine itself. Unlike most wines in Italy, the quality of wine in Latium appears to have somewhat declined, the reason being that Rome itself represents a huge market that require low-cost wine. That said, we still advise our readers to sit down at any of those trattorie, soak in the sun while drinking chilled Frascati or whatever the house wine will be. In this case, the scene abundantly complements the food and wine and your memory of it will be a pleasant and long-lasting one. 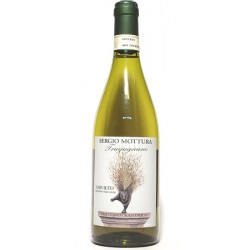 The vineyard "Tragugnano" extends for 13 hectares, facing south at an altitude of about 160/180 meters. Clay soil of medium consistency.
The vineyard includes all the Orvieto wine grape